An exhibition of Iranian-American artist Shirin Neshat’s works at the Hirshorn Museum in Washington, DC wrapped up last month after garnering much acclaim. Running from May 18th – September 20th, 2015, the exhibit, entitled Facing History, featured a handful of Ms. Neshat’s iconic pieces in both photographic and video form and integrating snippets of Iranian history and perceptions of the Islamic world throughout.

Based in New York, Ms. Neshat was born in Qazvin, Iran in 1957 and lived there until she left to the US for art school during the Iranian Revolution, settling in Los Angeles for the duration of her academic career.

END_OF_DOCUMENT_TOKEN_TO_BE_REPLACED

Beyt by 2b Design, a social enterprise based in Cambridge, MA, 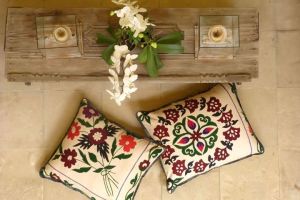 places importance on the preservation of cultural and architectural preservation. Known casually as Beyt, it is owned by an international design/business-savvy couple who pick through salvage yards in Syria, Lebanon and Egypt to salvage parts of destroyed traditional homes, which they then upcycle into stunning and unique home design pieces.

END_OF_DOCUMENT_TOKEN_TO_BE_REPLACED

“Forgotten Queen” from the Sitara Series

Yemeni photographer Ibi Ibrahim is to be featured in the upcoming Art14 annual global art fair in London, UK.

At only 26 years old, Mr. Ibrahim has built up an extensive repertoire of photographic pieces focused issues that are treated as significant taboos in the Arab and greater Islamic world, making his work a point of controversy for some.  Such taboos include issues pertaining to religion, identity, homosexuality, gender identity and equality, and women’s empowerment, among others. END_OF_DOCUMENT_TOKEN_TO_BE_REPLACED

Known informally as the “Sufi Frida Kahlo”, Maïmouna Guerresi is an Italian artist who is most known for her blending of different mediums, primarily sculpture video, installation pieces and photography.

Originally born in Italy, Mr. Guerresi converted to Islam after an inspirational trip to Senegal in the early 1990s, joining the Murid community there. END_OF_DOCUMENT_TOKEN_TO_BE_REPLACED 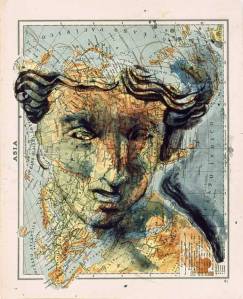 Spanish artist Fernando Vincente has adopted a very unique approach to portraiture in incorporating cartography and geography into his “Atlas” series. To achieve the finished product, Mr. Vincente gathered old maps which he then painted over with semi-transluscent layers of acrylic paint into portraits of humans, animals and skulls. END_OF_DOCUMENT_TOKEN_TO_BE_REPLACED 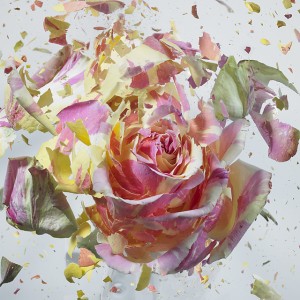 German photographer Martin Klimas has recently produced two remarkable sets of photographs that are particularly worthy of mention, one of which will be featured in an exhibition opening tomorrow, September 18th, 2013. Based in Düsseldorf, Mr. Klimas has made a name for himself for his use of high-speed photography, capturing moments of intense action in an image.  END_OF_DOCUMENT_TOKEN_TO_BE_REPLACED

Guillermo Bert, a Chilean Artist based in Los Angeles, CA, USA, is currently working on a project called “Encoded Textiles” which will soon be ripe and ready for global presentation. The exhibit is the first of its kind in that it examines the link between technology and tradition in the comparison of Native American tribal images to Quick Response (QR) Code boxes.  END_OF_DOCUMENT_TOKEN_TO_BE_REPLACED 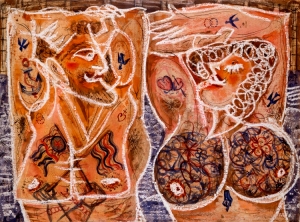 The Parrish Art Museum, located in the Long Island town of Water Mill, New York, is currently hosting an exhibition entitled “Angels, Demons and Savages: Pollock, Ossorio, Dubuffet”. The highlight of this exhibition is the placement of Filipino art collector and painter Alfonso Ossorio alongside his idols and much more famous contemporaries, abstract expressionist painters Jackson Pollock and Jean Dubuffet. END_OF_DOCUMENT_TOKEN_TO_BE_REPLACED

The famed Belvedere Museum in Vienna, Austria is hosting an exhibition entitled “Decadence: Aspects of Austrian Symbolism”. Noted as being the first large-scale exhibition of its kind, “Decadence” explores the artistic movement of symbolism which took hold of the Austrian art scene in the late 19th and early 20th centuries. END_OF_DOCUMENT_TOKEN_TO_BE_REPLACED